In this teardown report of the iPhone 12 Pro Max (Model A2342, 128 GB, Graphite color), we will dissect Apple's premium offering and see how it ranks in comparison to others in the lineup and its predecessors. 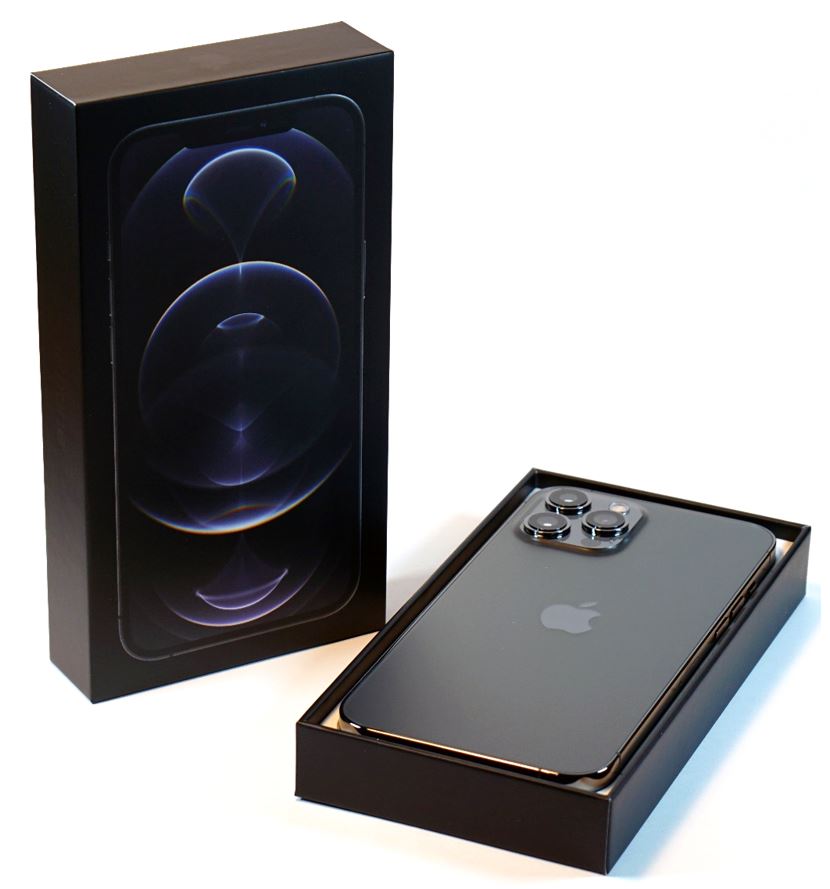 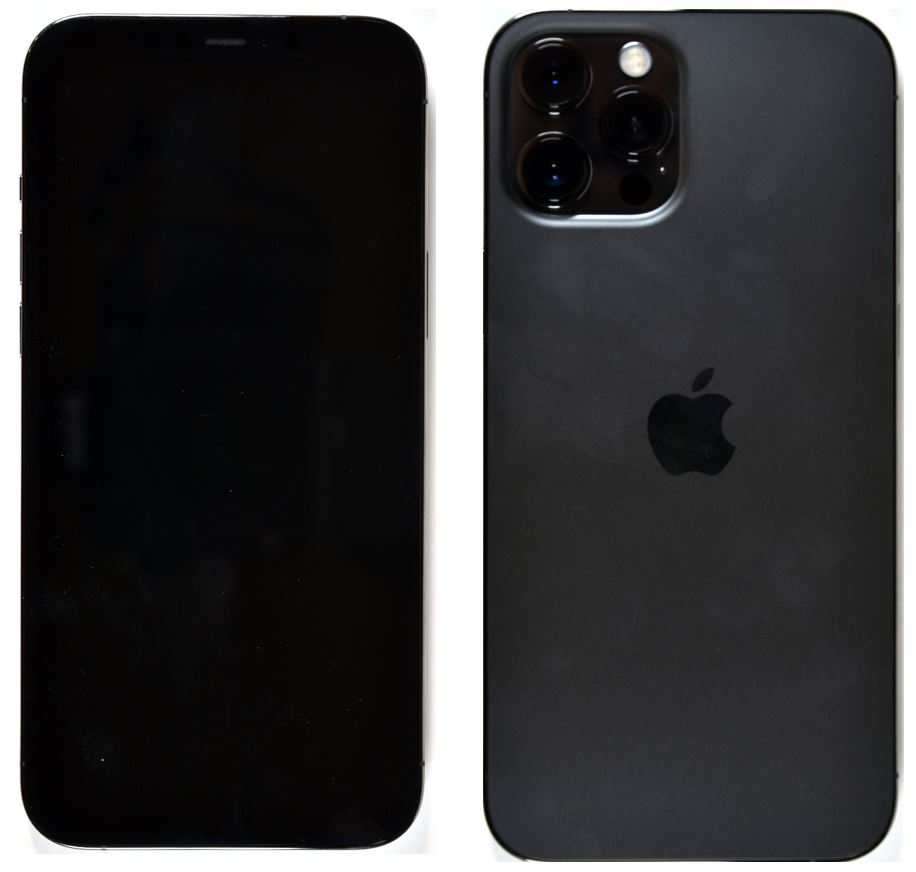 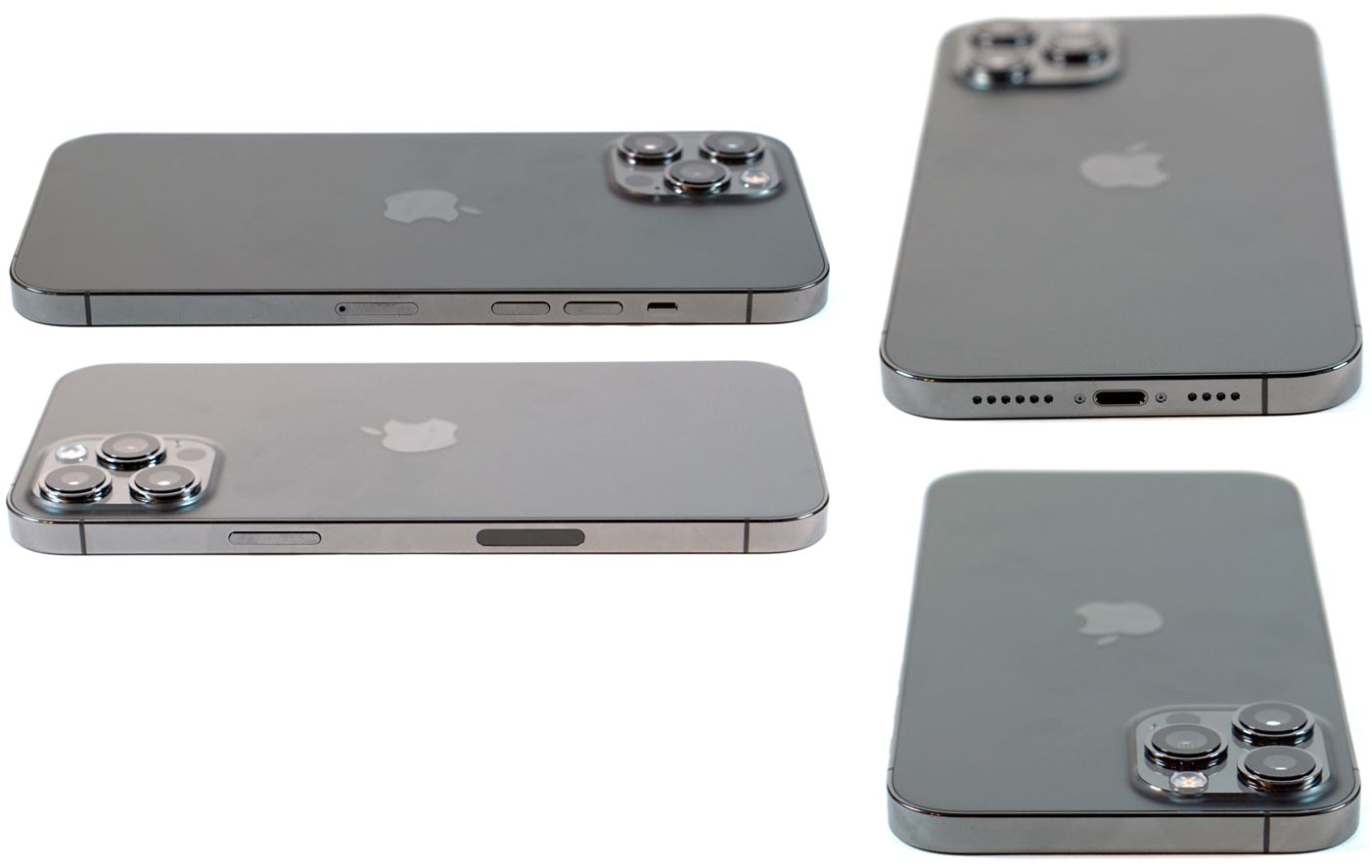 The display on iPhone 12 Pro Max supports 2778x1284 pixel resolution at 458 PPI compared to 2688x1242 pixel resolution at 458 PPI on the iPhone 11 Pro Max. The iPhone 12 lineup also features Ceramic Shield on the display which is a cover glass that has nano-ceramic crystals infused into the front-glass of the iPhone to improve its durability offering up to four times better drop protection as compared to its predecessors making it the toughest iPhone in the world. 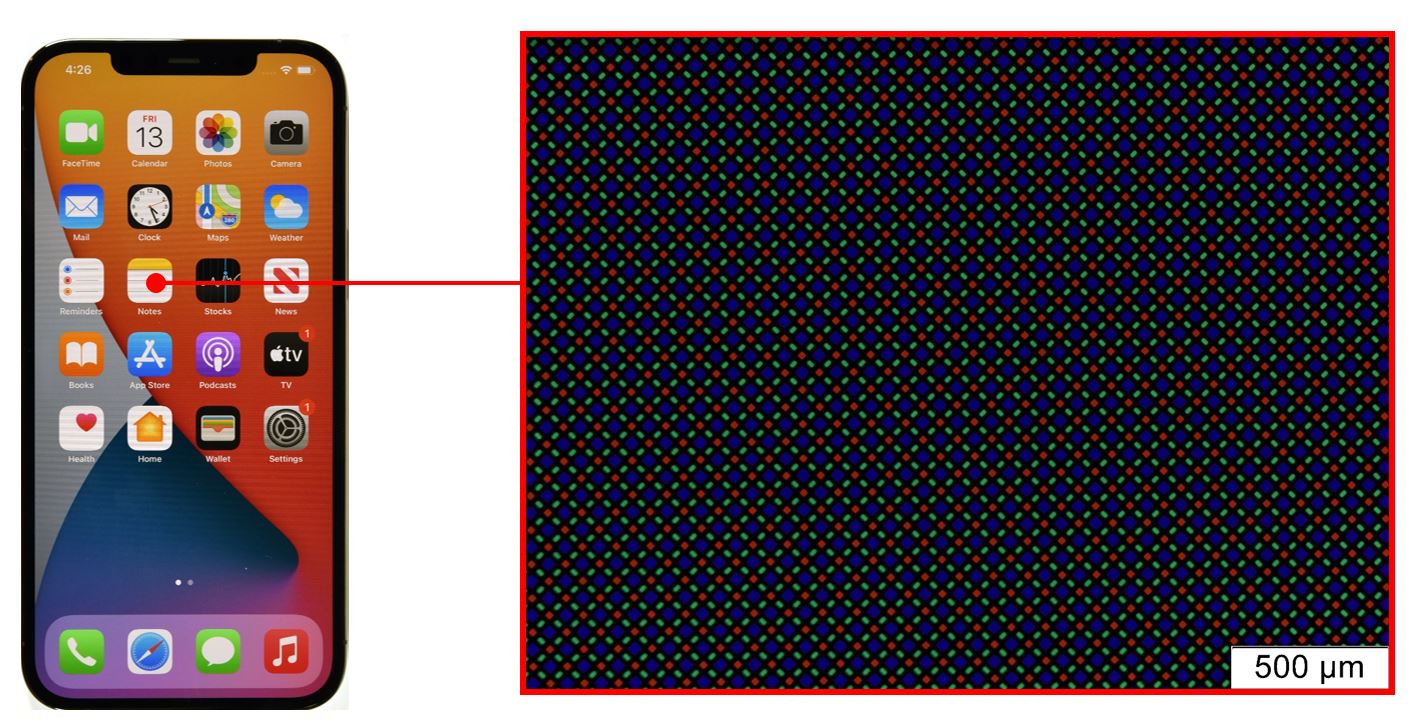 Like every iPhone since iPhone 5, the teardown of the device is initiated by removing the display screen. The adhesive underneath the screen of iPhone 12 Pro Max was softened upon heating. The screen is separated from rest of the body using a slack to reveal the logic boards and battery.

It was very surprising to see the difference in the stacked logic boards (PCBs) compared to iPhone 12 Pro and iPhone 12 PCBs we identified during our iPhone 12 Pro teardown. The design of the PCB stack is a same inverted ‘L’ shape, but wider and shorter compared to the PCB stack of the iPhone 12 Pro and iPhone 12.  The PCB stack found in the Pro Max device seems to be smaller compared to the iPhone 12 Pro PCB stack and we believe this is to make more room for the higher capacity ‘L’ shaped battery used to power the larger display. This also means that Apple had to populate the integrated circuits (ICs) on the PCB more densely. We observed that most of the ICs are common between the sibling PCB stacks but are placed differently to maintain PCB packing efficiency. The Taptic Engine (haptic feedback system) is also differently shaped and most likely includes a more powerful vibration motor. The rest of the major components such as camera modules (front and rear), bottom speaker module, mmWave antenna modules appear to be similar and similarly placed to the iPhone 12 Pro counterparts. 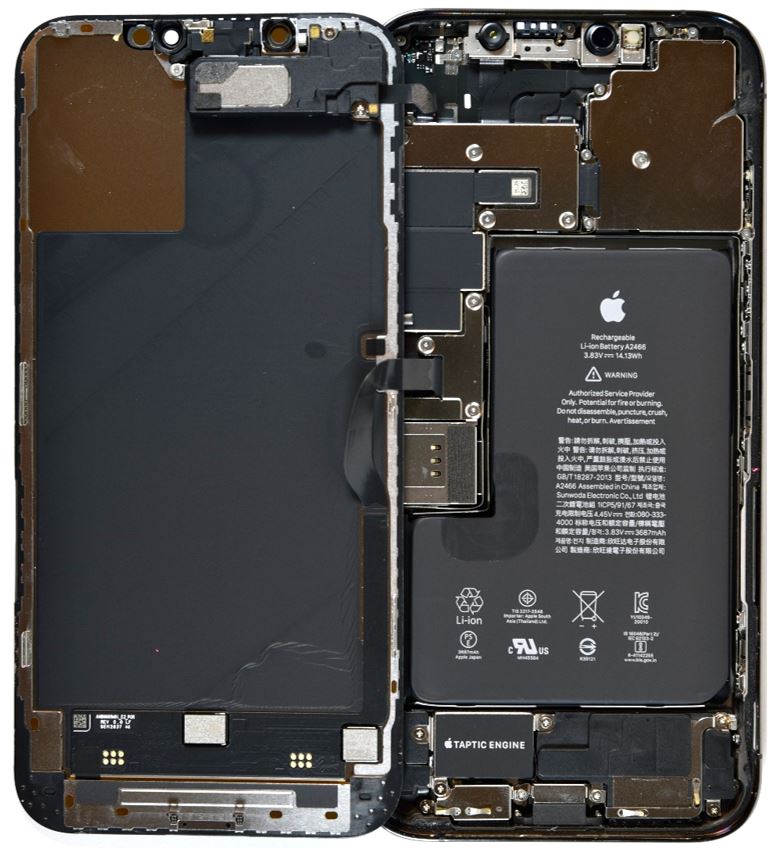 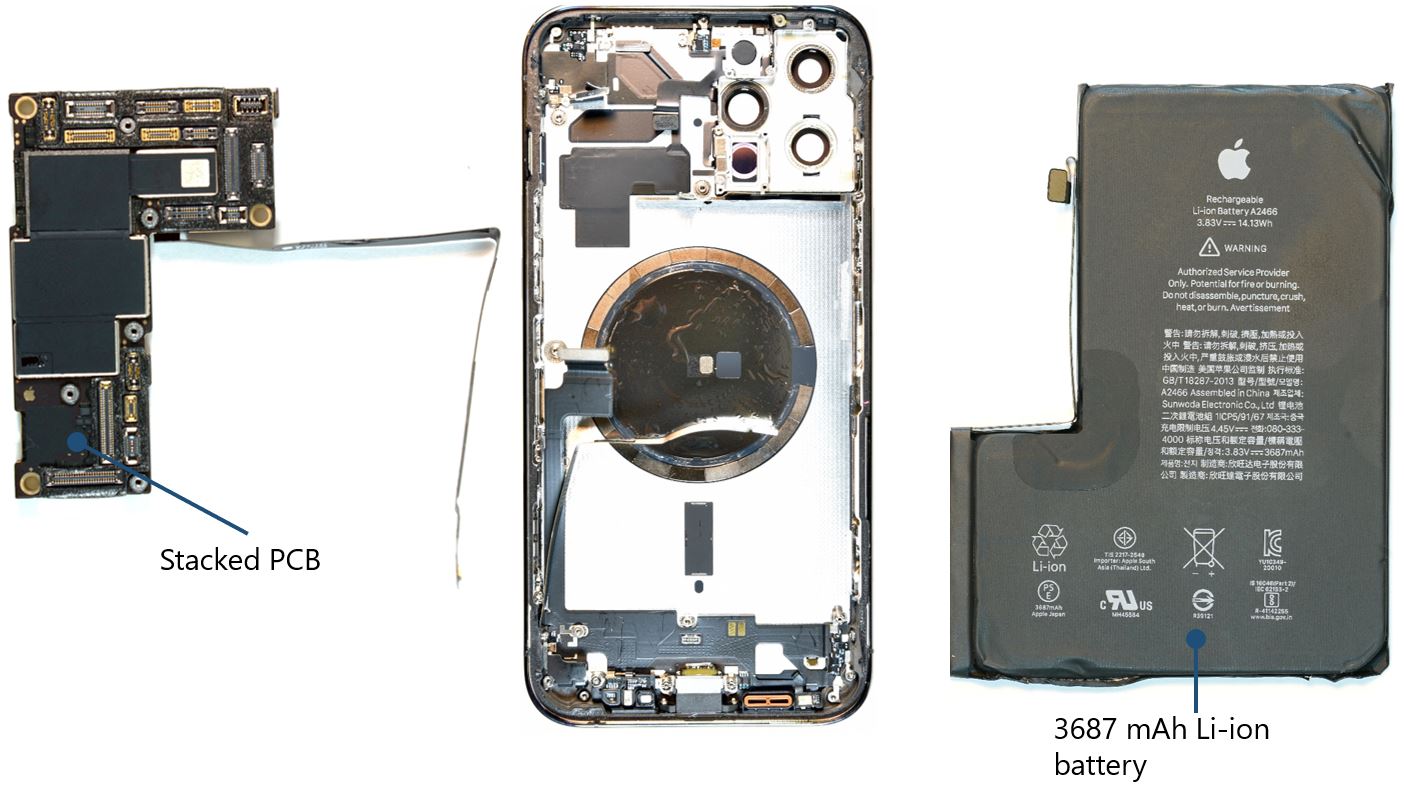 Figure 7: Removal of stacked logic boards, battery and other components

The iPhone 12 Pro Max is powered by Apple’s A14 Bionic chip, which is a 5nm, 64-bit six-score CPU implementing ARMv8 ISA with two high performance cores called Firestorm and four energy-efficient cores called Icestorm. Apple is first in the industry to manufacture it with the 5nm process technology. It means lower power consumption for given amount of work and it is shared between all iPhones in the 12 series.

The A14 Bionic chip consists of 11.8B transistors which is about 40 percent more than the 8.5B transistors in the A13 Bionic chip. The A14 Bionic IC is a package-on-package (PoP) structure which comprises of the application processor IC package and a 6GB RAM package. The 6GB RAM is an upgrade from the last generation iPhones which had 4GB DRAM capacity. 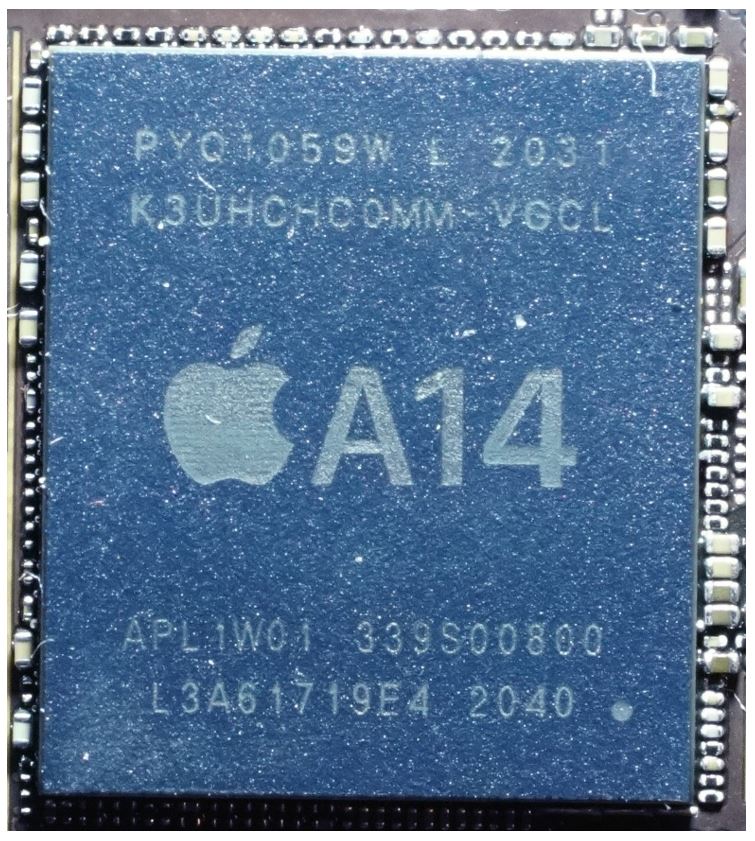 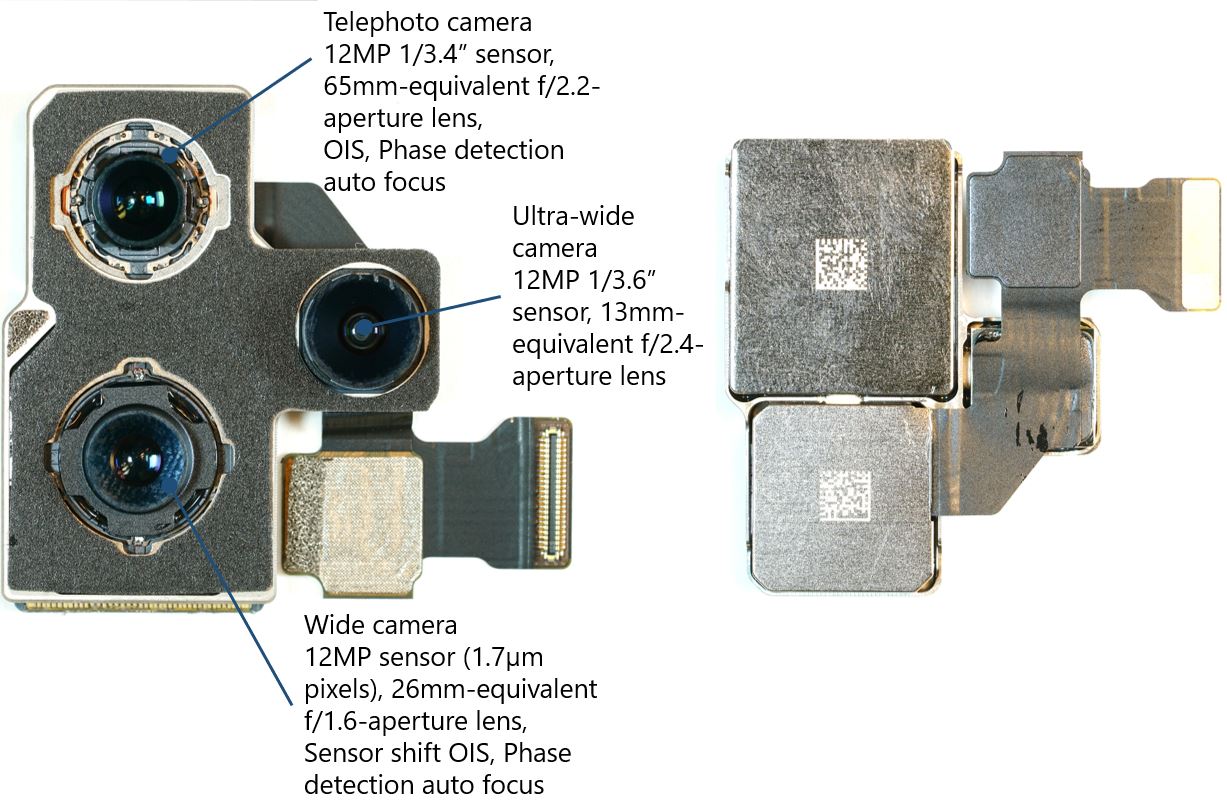 The wide camera on the iPhone 12 Pro Max also features the most advanced stabilization technology on any smartphone called the Sensor-shift. Sensor-shift stabilization is a high-end DSLR stabilization approach which applies stabilization to the image sensor rather than the heavier lens (lens-based OIS used in iPhone 12 lineup and its predecessors) to precisely control motion in X and Y direction while maintaining sharpness. This enables to cancel both low and high frequency disturbances like hand movements or car vibrations. iPhone 12 lineup is the world’s first smartphone which is capable to record, playback and edit 10-bit HDR footage with Dolby Vision. 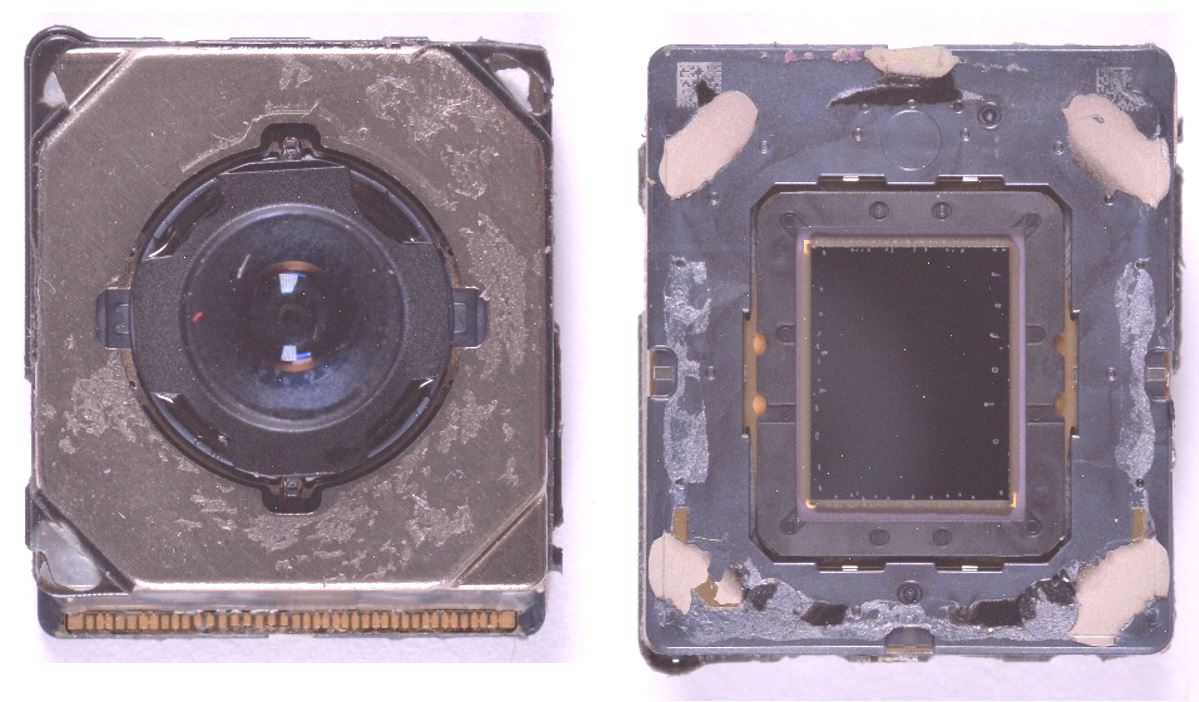 The teardown of the wide camera module reveals the lens subsystem and the image sensor board (subsystem) comprising various IC components, that are likely to be stabilizing driver, flash memory, gyroscope, and more.

The sensor shift stabilization can be seen in action in the following video clips where the image sensor board moves in X-Y plane to compensate the unwanted vibrations or movements of the camera system.

Video 1: Sensor shift stabilization mechanism as viewed from the rear side of the wide camera module assembly

The front camera setup of iPhone 12 Pro Max is similar to that of its predecessor which includes a 12-megapixel camera, an Infrared camera, flood illuminator and a dot projector. The infrared camera, flood illuminator and the dot projector, also known as the TrueDepth Camera System, work together in order to enable Face ID on the iPhone. The selfie camera now supports Smart HDR 3, Deep Fusion, Night Mode and night mode Portrait shots.

The iPhone 12 lineup is the first Apple product to feature a 5G capability and all four of its new iPhone 12 models come with next generation 5G cellular connectivity. Apple claimed the iPhone 12 lineup supports most 5G bands compared to any other smartphone (see Table 2).

The 5G capability of the iPhone 12 lineup is powered mainly by Qualcomm. The teardown of iPhone 12 Pro Max reveals that Apple is using Qualcomm Snapdragon X55 modem along with PMX55 PMIC which are very likely to be shared among the lineup. The teardown further reveals that Qualcomm SDR865 RF transceiver for 5G NR (sub 6 GHz, FR1), LTE and legacy RATs.  In comparison, the iPhone 11 Pro’s cellular system (LTE) runs on Intel’s technology and has Intel PMB5765 RF transceiver along with Intel PMB9960 modem.

he iPhone 12 Pro Max teardown revealed the presence of Qualcomm SMR526 5G mmWave IF (intermediate frequency) module, similar to the iPhone 12 and iPhone 12 Pro. The SMR526 is also featured in the Samsung S20 Ultra 5G smartphones launched earlier this year. The SMR526 IC is part of the 5G mmWave system (5G NR - FR2) and provides the intermediate frequency for the 5G mmWave transceiver system. We identified the Murata 1XR-484 chip on the PCB which appears to comprise the mmWave RF transceiver and corresponding FEMs to provide mmWave signals for the two 5G mmWave antenna modules identified at the back of the PCB stack and at the side of the phone. The 5G mmWave system appears to be slightly different from the one implemented in the Samsung Galaxy S20 Ultra. The Qualcomm QTM525 antenna module implemented in the S20 Ultra comprises the integrated mmWave RF transceiver, however, in the iPhone 12 system, the mmWave RF transceiver appears to be implemented on the main PCB board. It will be interesting to analyze the antenna module implementation in this phone which is a Murata module instead of the Qualcomm module. Apple seems to be using different packages for the 5G mmWave antenna 2 (implemented at the side of the phone) between different and even same versions of the 12 series iPhones. We have observed that the mmWave antenna module 2 is available in either the Murata package or the USI package, but we believe that the antenna system implemented within either of these packages are the same. We will know more once we perform detailed teardown analysis on these mmWave antenna modules.

Figure 14: Front-side and back-side of the stacked PCB

Figure 15: mmWave antenna module 2 located at the side of the phone

The bezels on the iPhone 12 Pro Max’s are made up of stainless steel which is stronger material compared to aluminum. The bezels edges are also squared compared to its previous curved edges. The SIM card tray is moved to the left side of the iPhone 12 series to make room for mmWave Antenna (module 2) cutouts below the power button on the right side of the mobile device. The other mmWave antenna (module 1) is present on the stacked PCB structure and it radiates from the back of the smartphone. 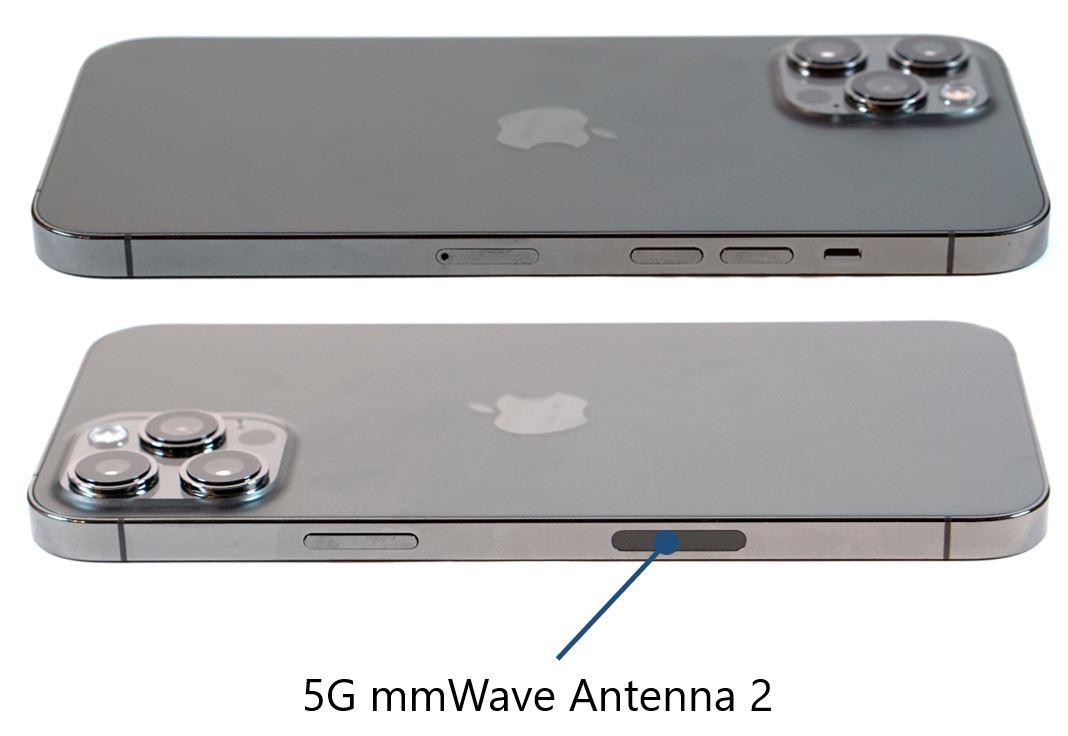 Figure 16: side views showing slit for the mmWave radiation from the antenna module 2

Skyworks SKY58240, Skyworks SKY58242, and Skyworks SKY58245 are likely power amplifier modules (PAM).  The Qualcomm’s QET5100 envelope tracking modules were also identified on the PCB. We have also located several FEMs from Murata, Qorvo and Skyworks on the PCBs. We will know more details regarding the FEMs implemented in iPhone 12 Pro Max during our detailed teardown analysis. 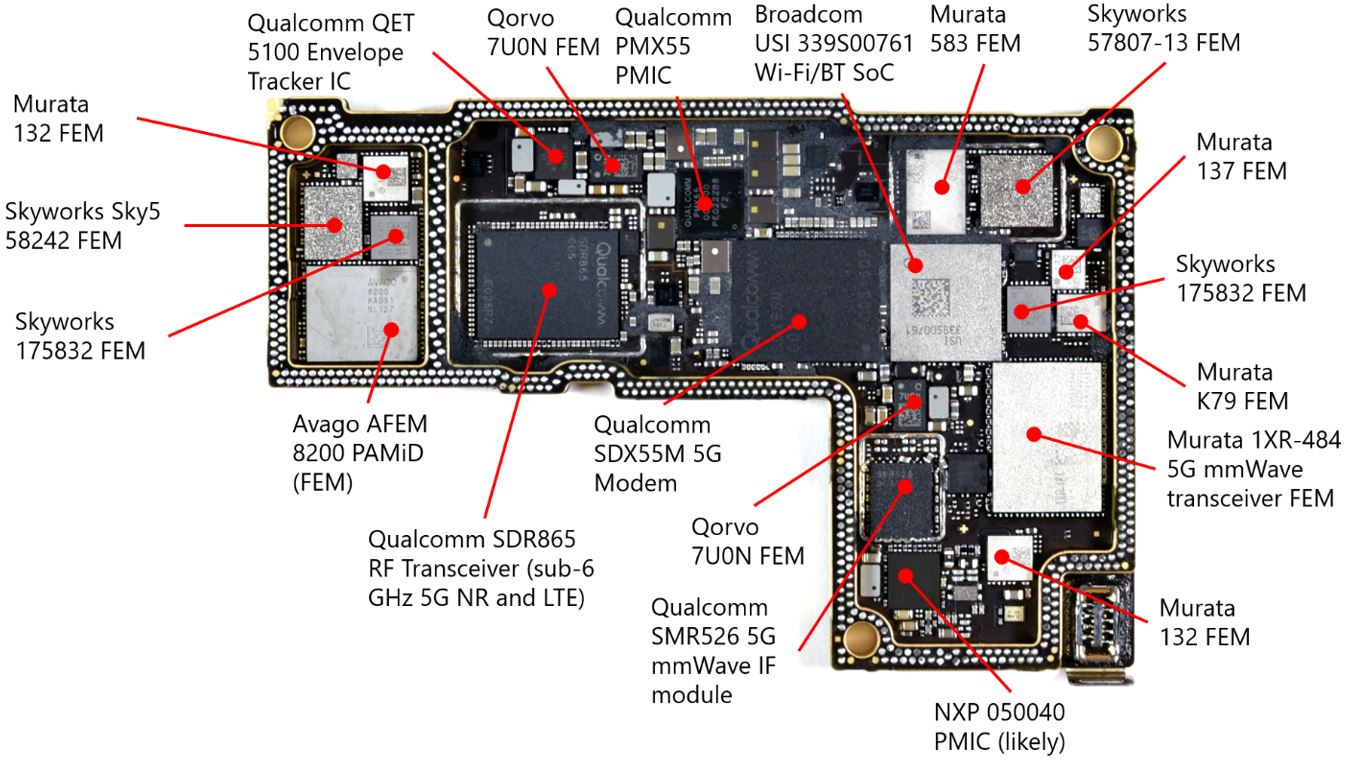 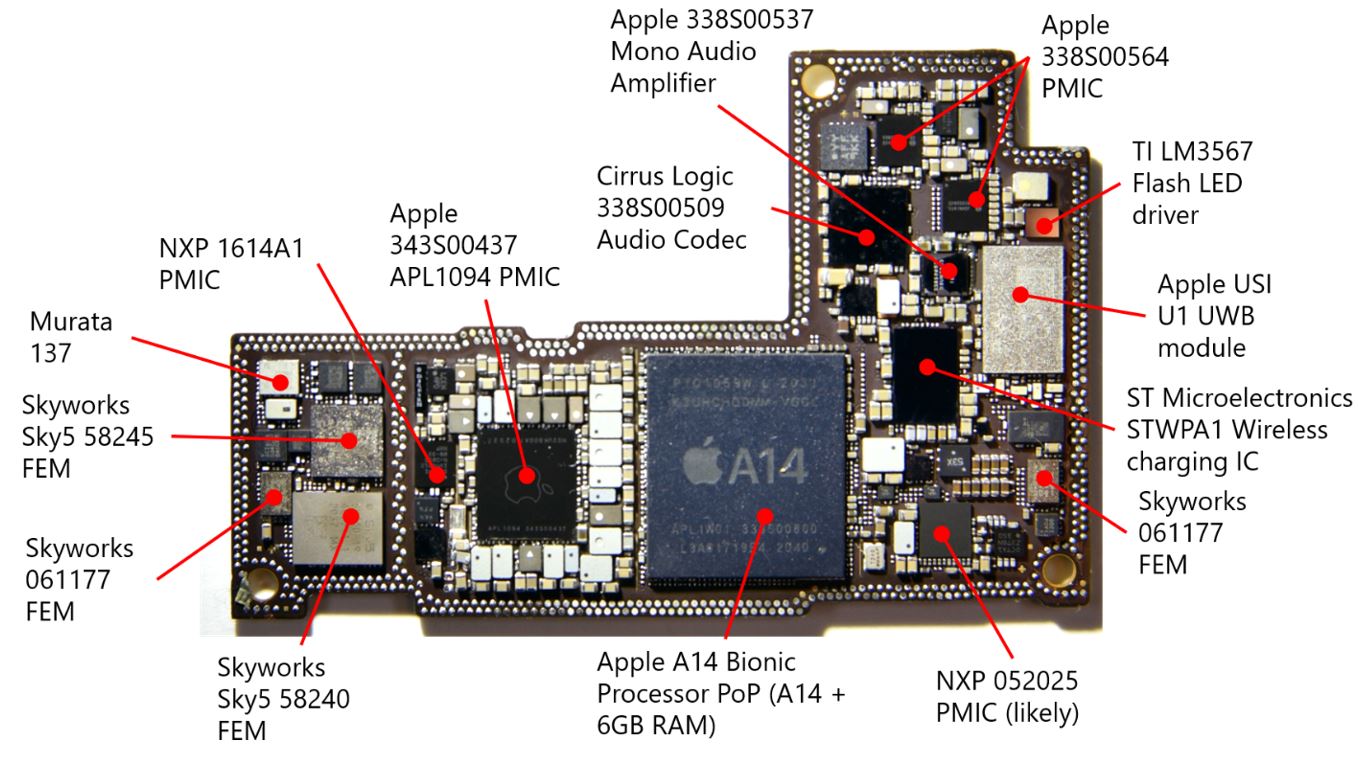 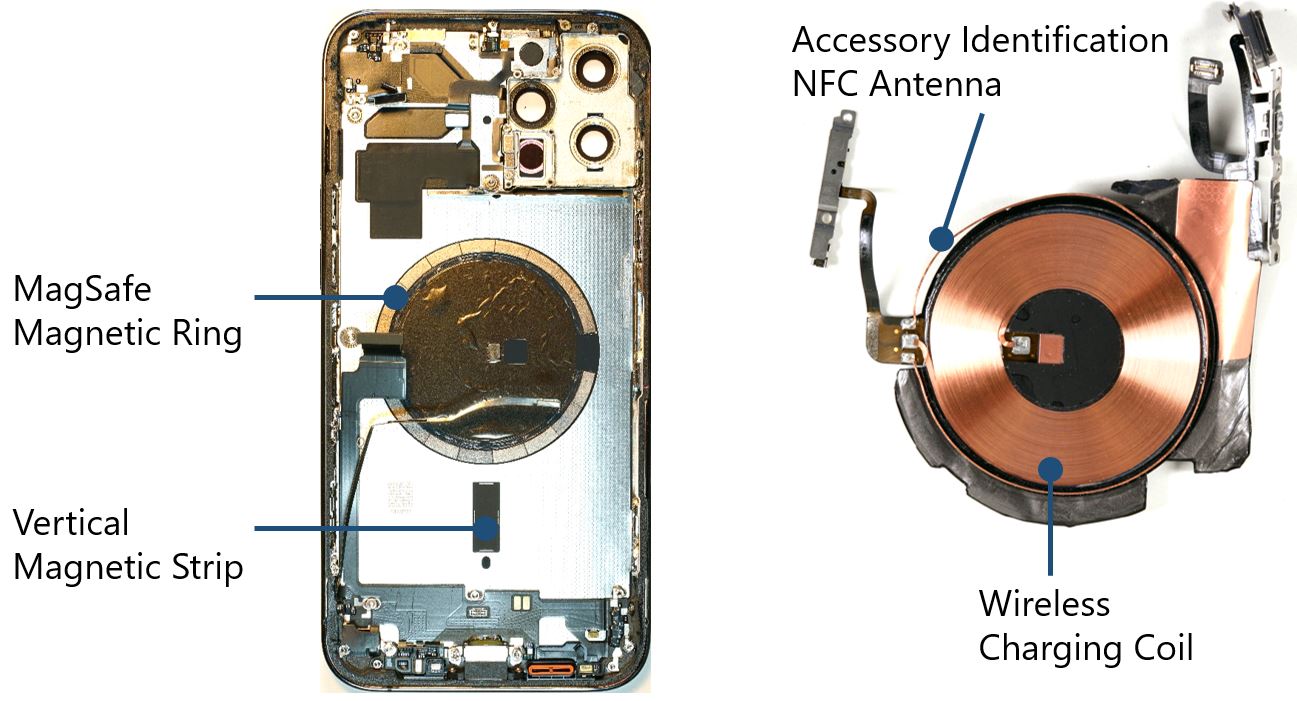 The battery in this phone is ‘L’ shaped which is believed to be the result of more complex and costly manufacturing process. It should be noted that the iPhone 11 Pro Max has a bigger battery capacity of 3,969 mAh even though it has a smaller 6.5-inch display and supports LTE only.

Apple claims that the more efficient A14 bionic chip in iPhone 12 lineup helps to offset the lower battery capacities. Apple’s technical specifications mention that the iPhone 12 Pro Max has a video playback of up to 17 hours as compared to 18 hours of video playback in iPhone 11 Pro. Nearly all other ratings remain the same. It would be interesting to put the iPhone 12 lineup’s batteries to real life tests. 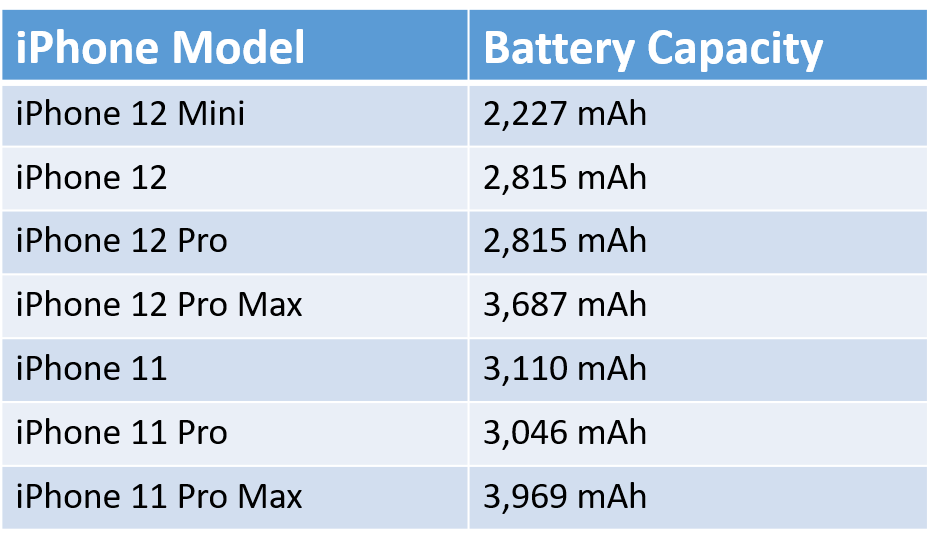 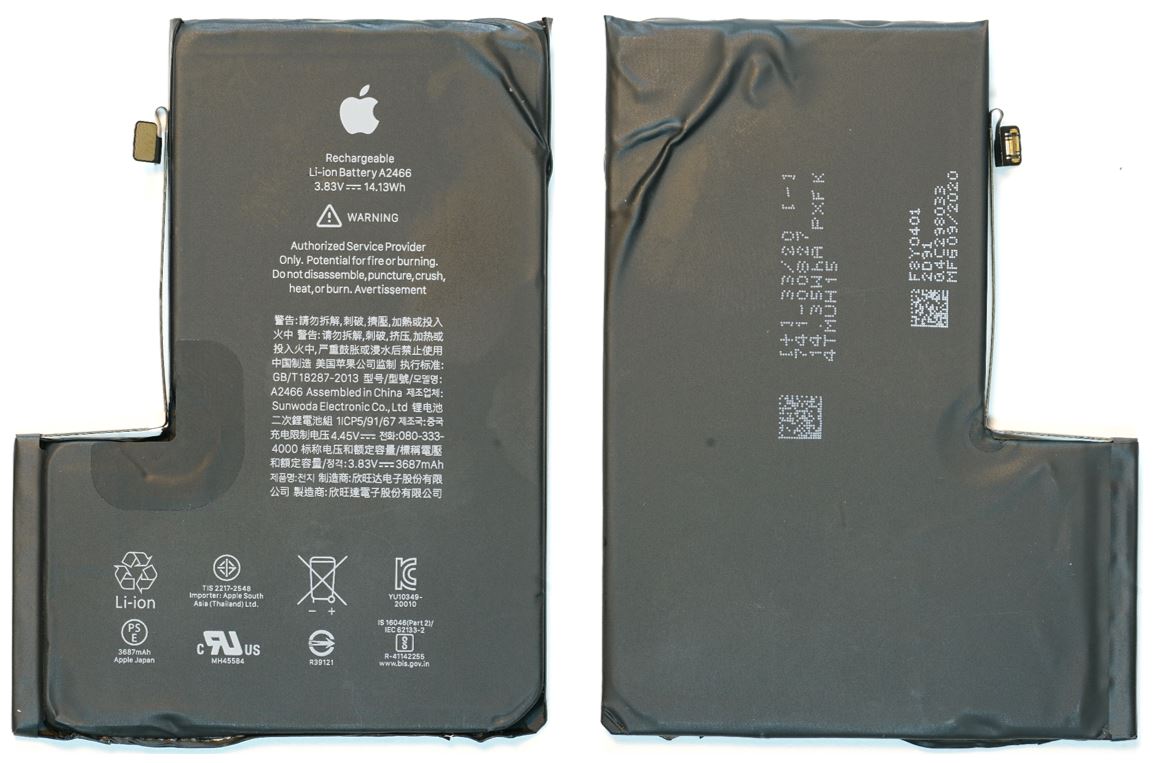