On September 15th, 2020, Apple unveiled the latest generation (Gen 4) iPad Air with A14 Bionic chip, the same chip that powers the iPhone 12 series lineup. The iPad Air 2020 offers several features that are comparable to its more expensive sibling, the iPad Pro 2020. The new iPad Air is compatible with the same accessories as the iPad Pro 2020, such as Magic Keyboard, Smart Keyboard Folio, and Apple Pencil (2nd Gen). The new iPad Air is also equipped with the same main camera sensor (12 MP, ƒ/1.8) and connectivity features (e.g. Wi-Fi 6, 4G LTE, BT 5.0). 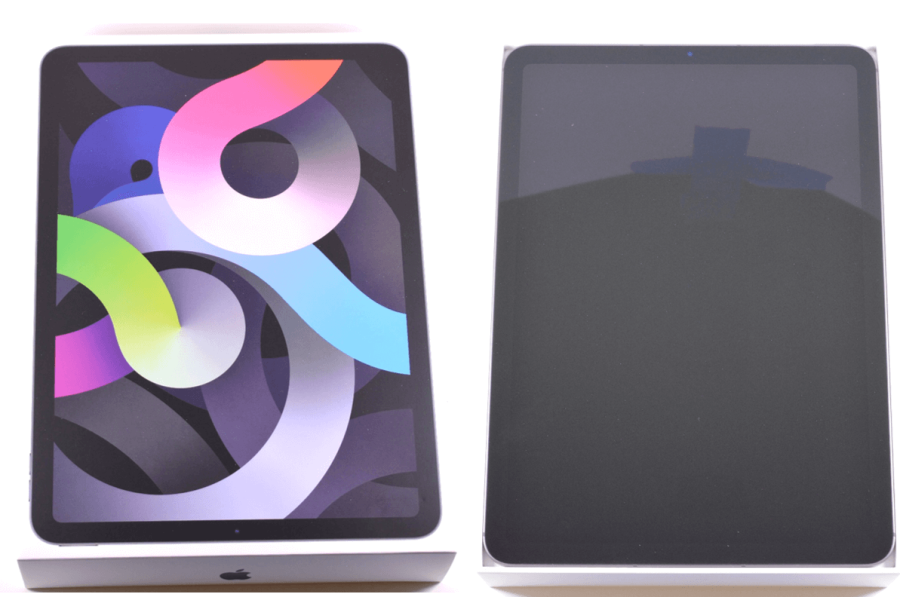 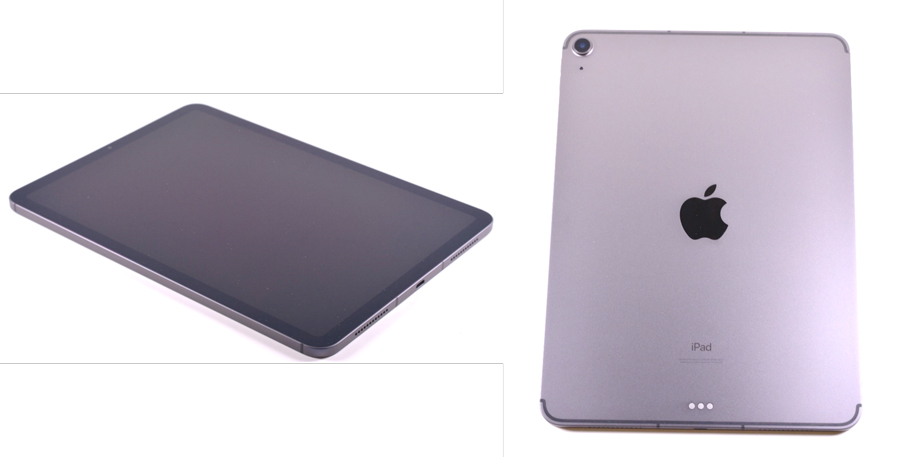 The iPad Air 2020 (4th Gen) has better performance than the iPad Pro at a lower cost point, making it the best Apple tablet to buy in 2020.

The iPad Air 2020 adopted the design of 2018 iPad Pro with squared-off edges, a larger display with slimmer bezel and curved corners. The iPad Air 2020 is the first iPad in the Air series to feature an all-display design with no Touch ID home button. Instead, the Touch ID fingerprint reader is now built into the power button on top of the device. This device lacks the Face ID biometric scan included in the Pro version.

Overall, the design of the new iPad Air 2020 is more modern, matching that of the new iPhone 12 and will age much better than that of iPad Air 2019 which already feels outdated.

The teardown of the iPad device is initiated by removing the display panel. The adhesive underneath the panel of iPad was softened upon heating. The display panel is separated from rest of the body using a slack to reveal the logic boards and battery. 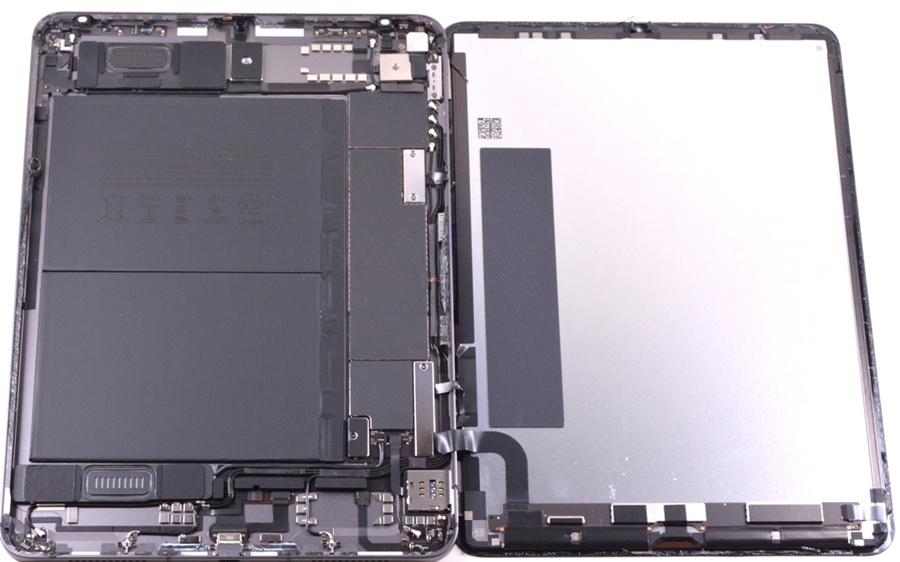 Figure 3: Removal of the screen 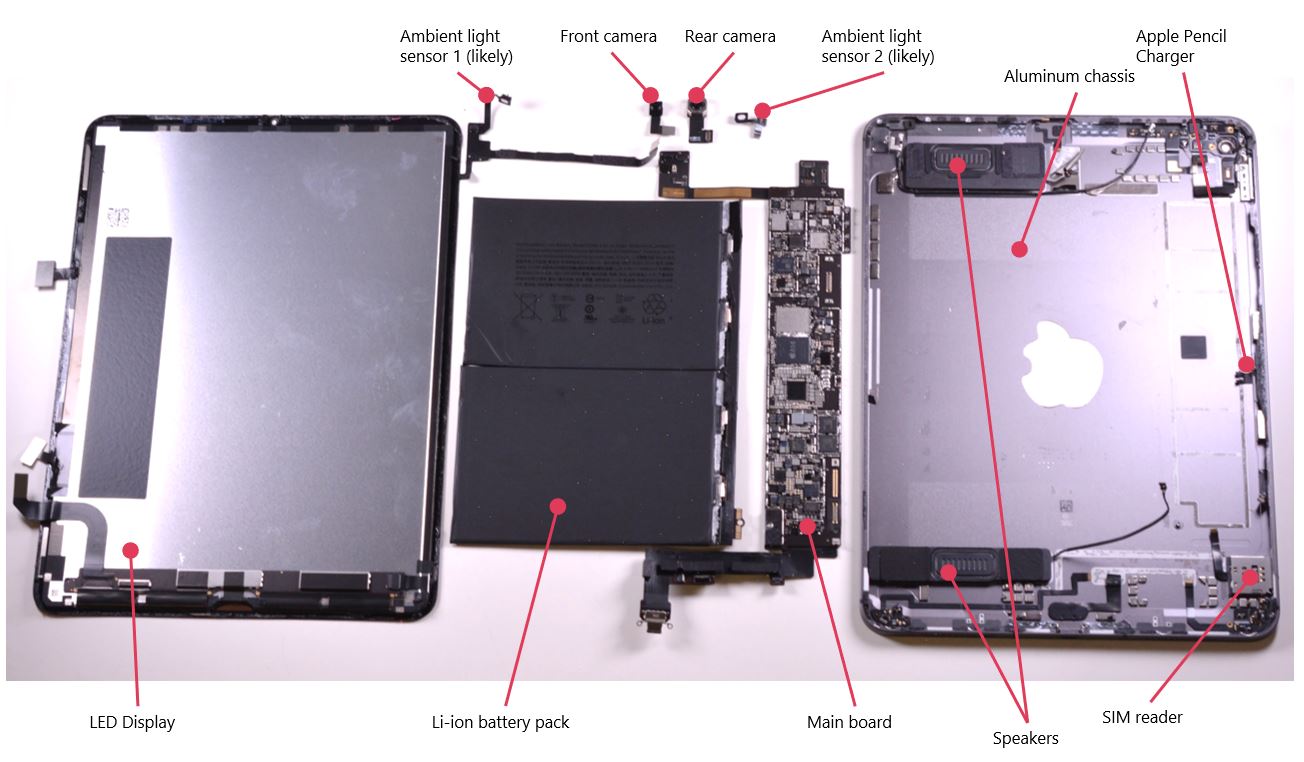 Figure 4: Removal of logic boards, battery and other components

The new iPad Air is powered by Apple’s A14 Bionic chip, a 5nm, 64-bit six-score CPU implementing ARMv8 ISA with two high performance cores called Firestorm and four energy-efficient cores called Icestorm. Apple is first in the industry to manufacture a product using the 5nm process technology, allowing for lower power consumption for a given amount of work. The A14 Bionic chip consists of 11.8B transistors which is about 40 percent more than the 8.5B transistors in the A13 Bionic chip. The A14 Bionic IC is a package-on-package (PoP) structure which is comprised of an application processor IC package and a 4GB RAM package. The 4GB RAM is an upgrade from the last generation iPad Air which used 3GB RAM capacity.

The A14 Bionic has a different architecture from A12Z Bionic used in iPad Pro 2020, as the latter is a 7nm, 64-bit Octa-core CPU with four high performance cores and four energy efficient cores. The A14 Bionic is built on latest process technology—5nm with high clock frequencies i.e. 1.80 GHz (base) and 3.01 GHz (boost). Compared to A12Z Bionic built on 7nm process technology with clock frequencies of 1.59 (base) and 2.49 (boost), the A14 Bionic performs much better in single core tasks (around 40 percent), while it is only slightly less faster (around 10 percent) in multi-core tasks due to more core counts on A12Z Bionic chip. Overall, the A14 Bionic is likely to be more power efficient for the given single or multi-core task scenarios. The performance leap from the older A13 Bionic and A12Z Bionic is huge and it will be interesting to see performance gains in the next generation of iMacs with the Apple silicon. 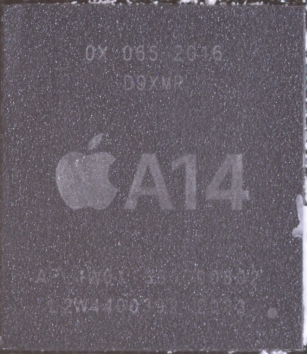 The iPad Air 2020 features a 12-megapixel wide rear camera with a f/1.8 aperture which offers Live Photos with stabilization, autofocus with Focus Pixels, Smart HDR and panorama up to 63 megapixel which is the same configuration of wide rear camera present in the high-end iPad Pro. The 11-inch iPad Pro 2020 has an additional 10-megapixel ultra-wide angle camera with f/2.4 aperture and a 125-degree field of view along with the LiDAR scanner (also present on the iPhone 12 Pro and iPhone 12 Pro Max). In comparison to these, the wide rear camera present on the iPad Air 2019 is an 8 megapixel with a f/2.4 aperture. 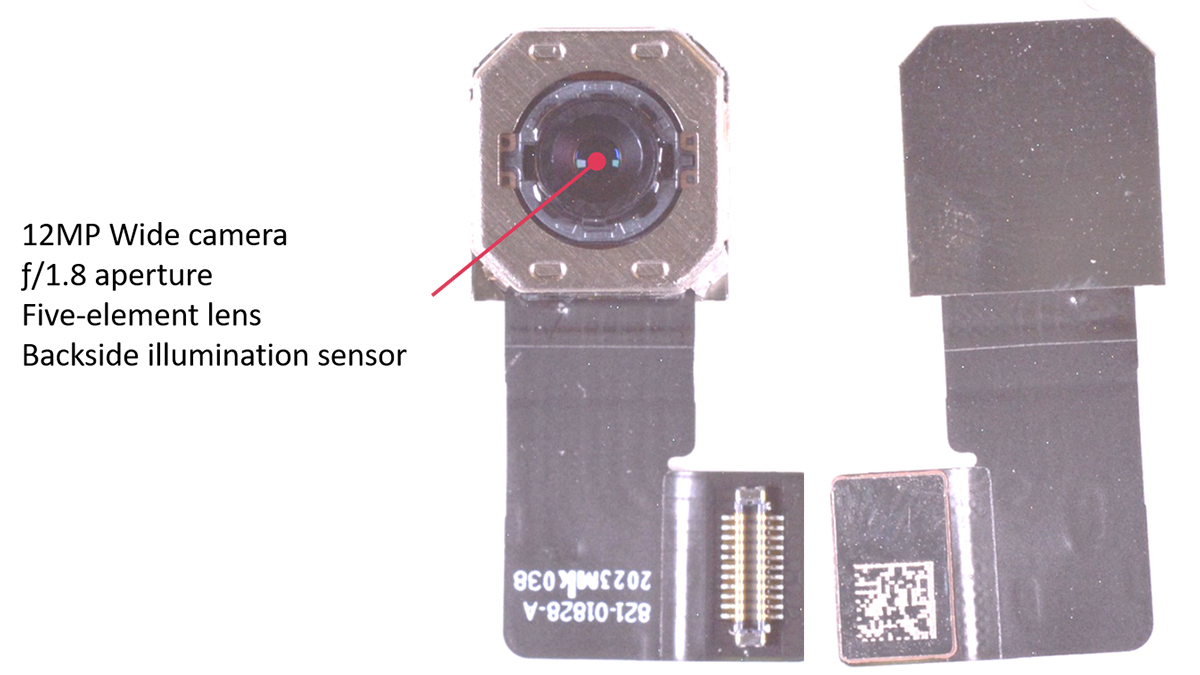 The front camera setup of iPhone 12 Pro is similar to that of its predecessor which includes a 12-megapixel camera, an infrared camera, flood illuminator and a dot projector. The infrared camera, flood illuminator and the dot projector, also known as the TrueDepth Camera System, work together in order to enable Face ID on the iPhone. The selfie camera now supports Smart HDR 3, Deep Fusion, Night Mode and night mode portrait shots. 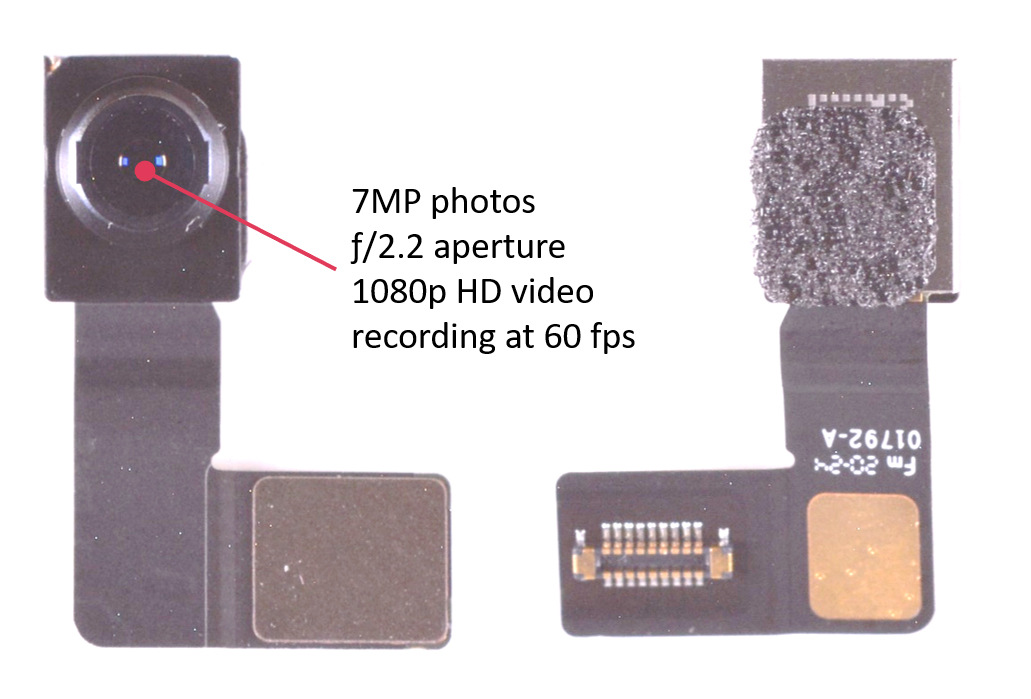 The IC components of the device are found to be embedded on the same side of the main board. The board is identified to be connected directly to the USB-C type connector through flexible cable. 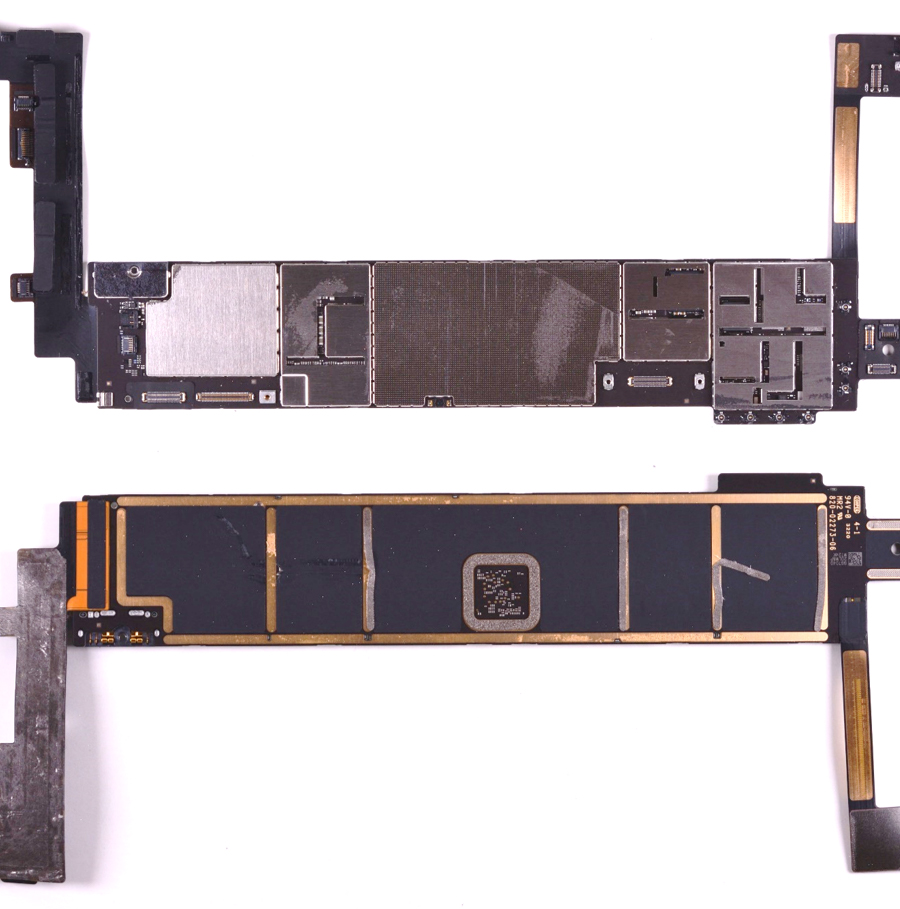 Figure 8: Front-side and back-side of the PCB 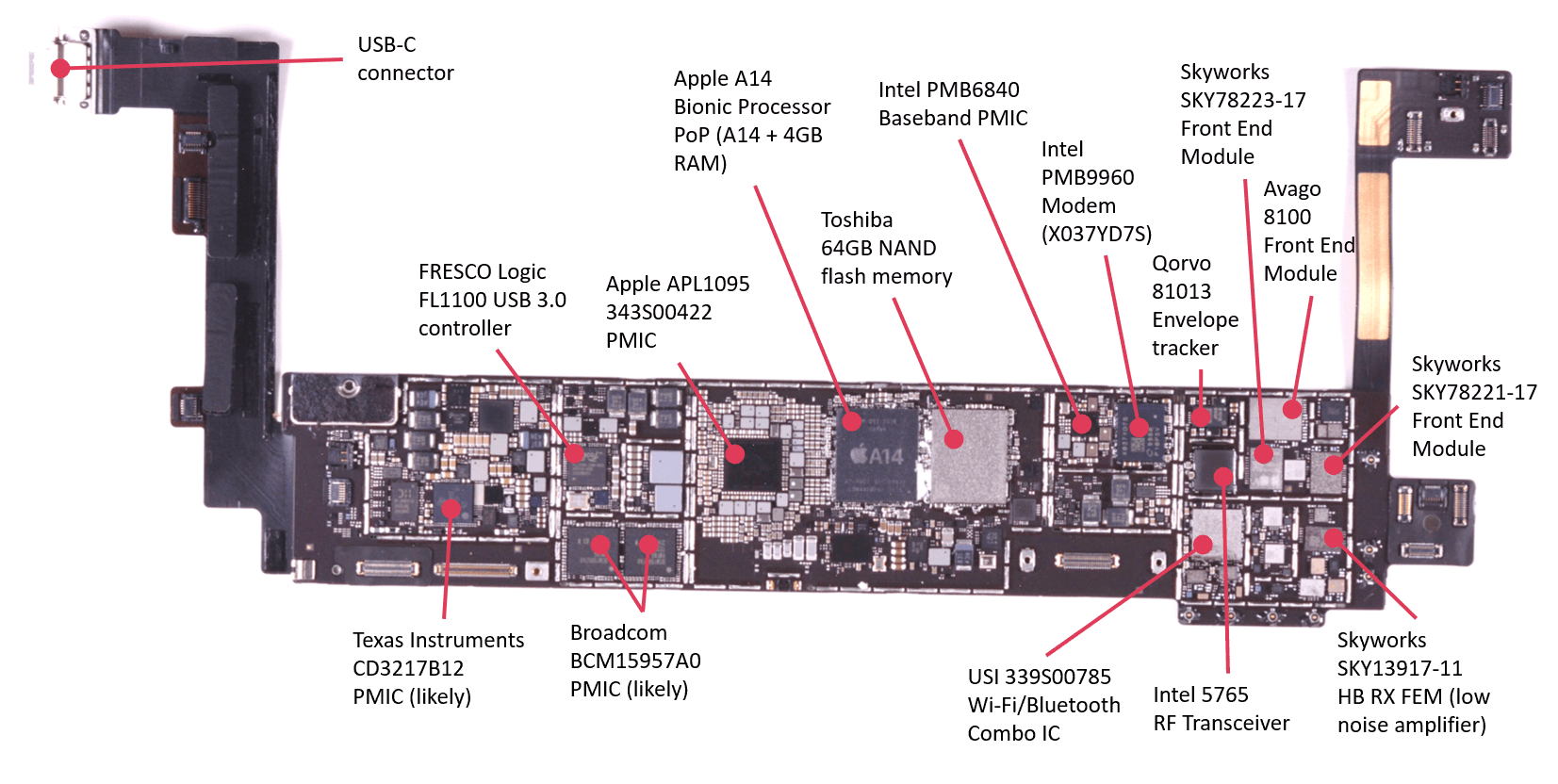 iPad Air 2020 (4th gen) is the first of its line up to feature a USB-C charging port which offers up to 5Gbps data transfer rate instead of a lightning port implemented in previous Apple devices. Some of the other functionalities that come to the iPad Air 2020 as a result of adoption of USB-C are able to connect to external 4K or 5K displays, USB thumb drives, cameras and other USB-C devices.

The iPad Air 2020 also features a smart connector at the back of the iPad Air which allows it to communicate with and power various accessories. There has been a Smart Connector on various models of Apple's iPads for quite a few years now. It uses three flush metal contacts and is held in place magnetically like the MagSafe power adapter. The Smart Connector allows accessories to draw power straight from the iPad itself thereby negating the need to charge the accessories themselves. Apple offers a couple of accessories for that make use of the Smart Connector, among the accessories are Smart Keyboard Folio and Magic Keyboard. Before the launch of iPad Air in 2020, the use of second generation Apple Pencil was limited to iPad Pro models. Further, during our teardown analysis we identified several magnets along the periphery of the device. We believe that these magnets enable attachment to various type of accessories such as Magic keyboard and more. 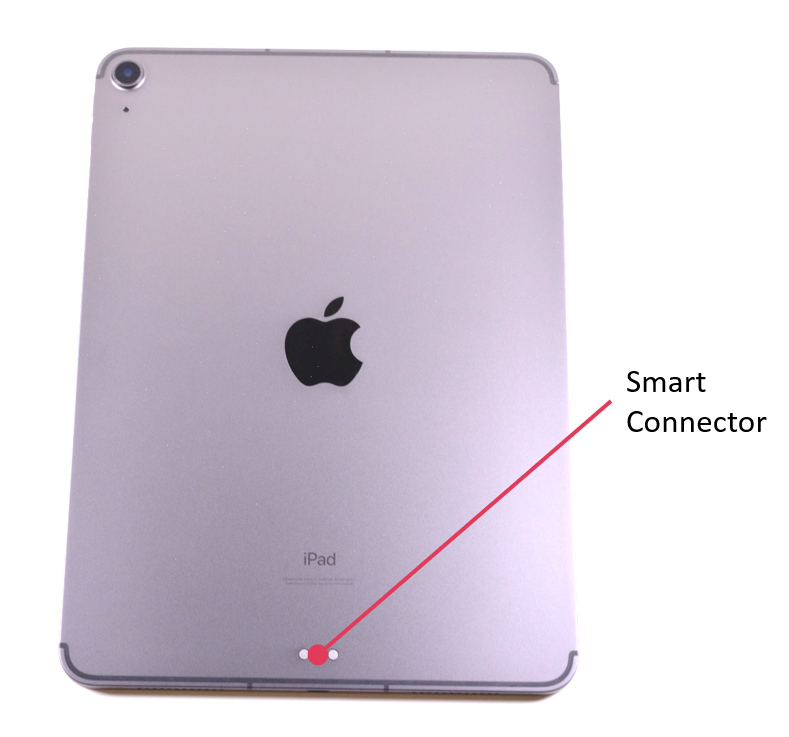 It is likely that the more efficient A14 bionic chip in iPad Pro 2020 helps to offset the lower battery capacities. Apple’s tech specifications mention that the iPad Air 2020 has a video playback of up to 10 hours on the Wi-Fi model and up to nine hours on the Wi-Fi+ Cellular models. It would be interesting to put the iPad Air’s batteries to real life tests. 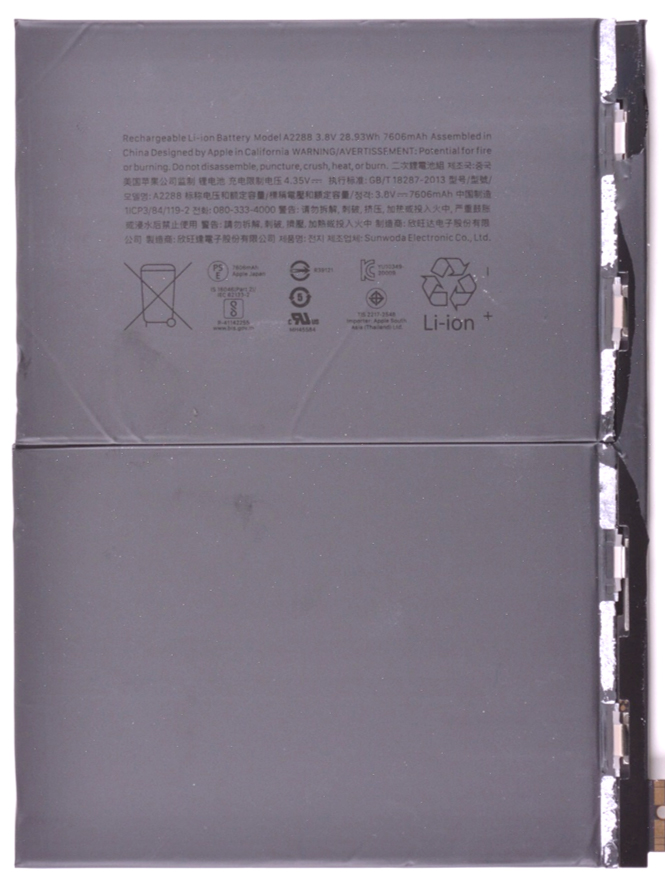 The iPad Air 2020 features a 10.9-inch edge-to-edge liquid retina display with 2360x1640 resolution with over 3.8M pixels for extra crisp images and videos compared to the iPad Air 2019 (3rd generation) which featured a smaller 10.5-inch display with 2224x1668 resolution. The iPad Air 2020 also supports the True Tone feature which adjusts the color and intensity of the display to match the ambient light so that the images appear more natural. This new version appears to be using two ambient light sensors to implement the True Tone feature. 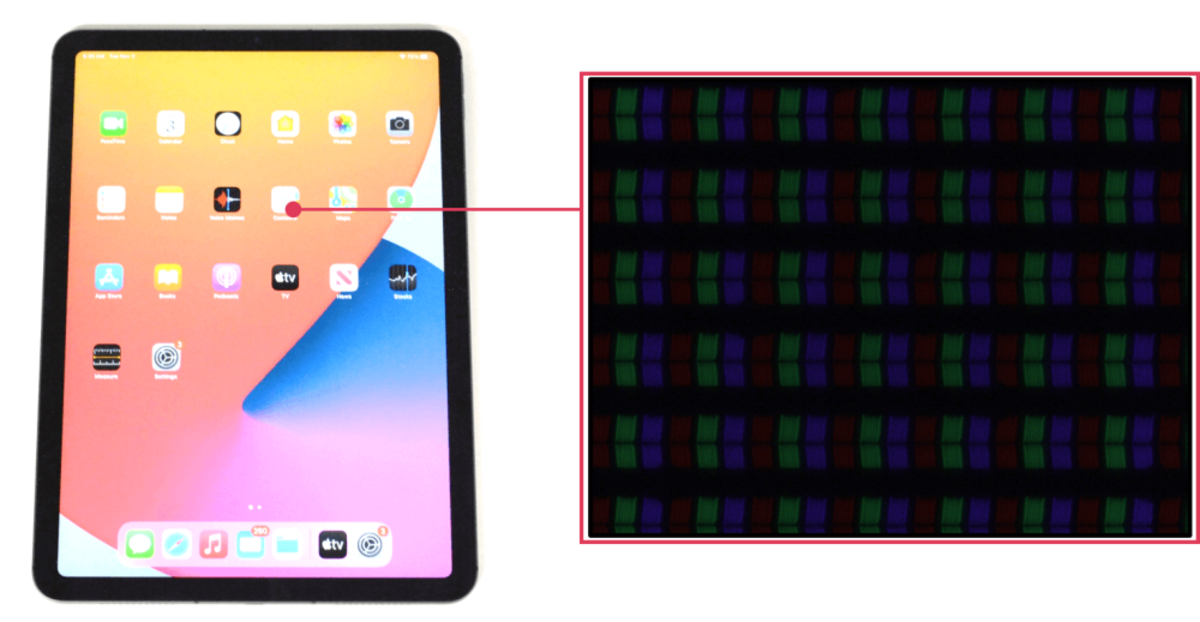 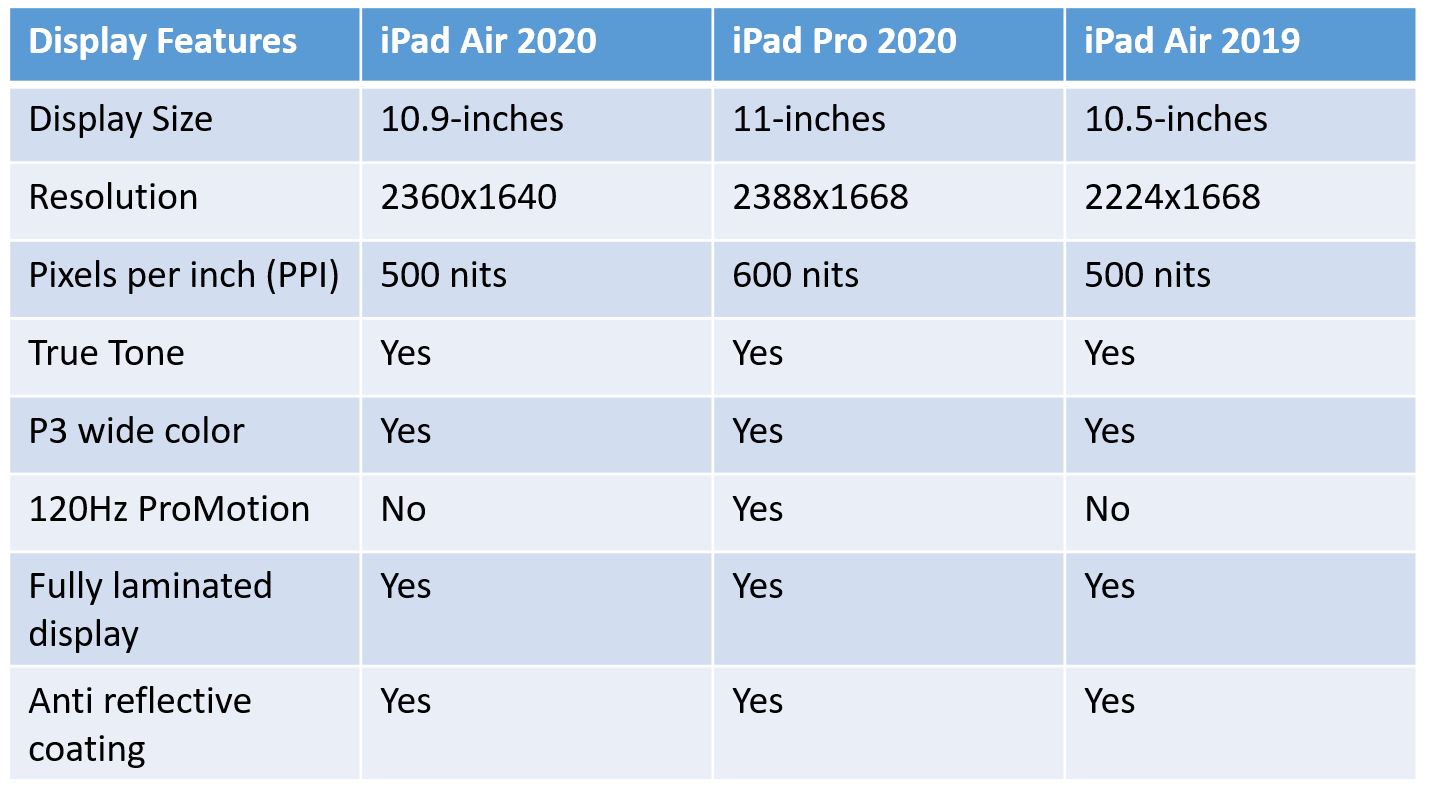 The iPad Air 2020 is the first iPad of the Air series to feature an all-display design with no Touch ID home button. Although unlike the iPad Pro 11-inch 2020, the iPad Air 2020 lacks the Face ID biometric scan, it features an all-new Touch ID fingerprint reader which is now built into the power button on top of the device. It is a change from Apple's typical Touch ID sensor design present under the home button. The home button from the iPad Air is removed which enables the Apple to utilize the entire screen area to place a more sophisticated looking edge-to-edge display. 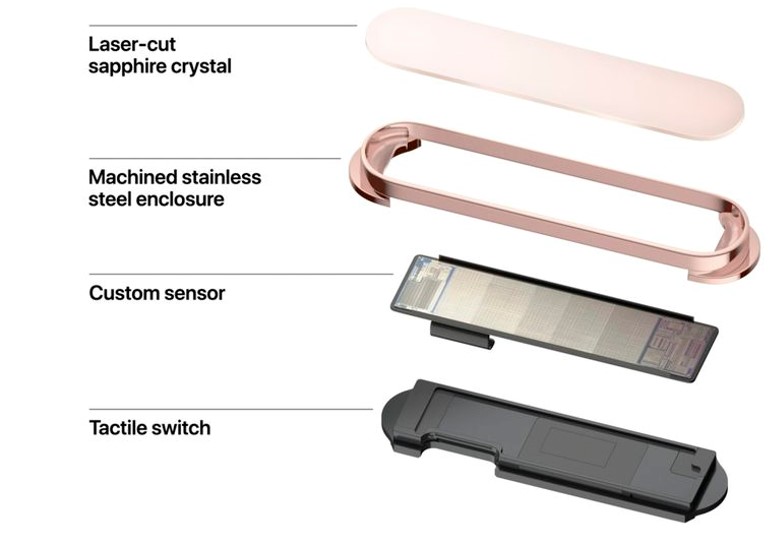